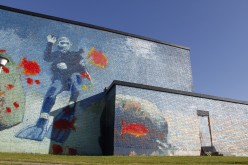 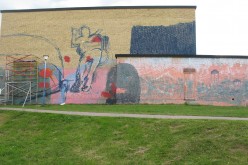 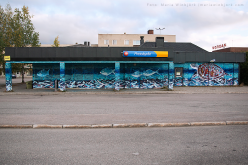 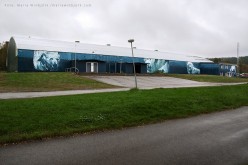 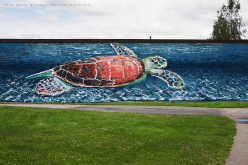 The project “ Underwater” was born as challenge, the intention was to create something visible unusual, that could have been integrated in the town context of Malberget.

This project started in 2011 in the offices of LKAB, thanks to the manager Mats Petersson and Tomma rum Art residency, with whom we discussed the idea, and the way to adapt the concept to the urban landscape. The common aim was to create something really special, to leave a visible track to the local community, and increase the value of the town, enhancing the beauty of Malmberget.

The starting idea was ambitious: carry out images that refere to the underwater world, flooding Malmberget of water, and let that underwater creatures, come out, on the facades of buildings. Water should have been the primary element, and the meeting point of all the project.

An unusual idea, maybe bizarre, but why don’t try? An exotic see in the Lapp land, represented in murales of huge size.

What can we carry out in a town whose future is to move about, for techni-cal reasons, due to the iron quarring which is in the subsoil?I thought to change the point of view, moving on from the mining subsoil that distinguish this town. I imagined to sink the town into the sea/under the sea where reigns the sense of freedom, endless spaces, and the beauty of colours. Water is seen as fluid element that fill up everything, and brings armony and life.

Together with the Tomma rum residency artists Emilia Norman and Maria Winbjork, we painted huge murales to suggest the sense of infinity, in deep contrast with the reality we were living.

Once more, the aims was to change, through art, the vision of a specific town, and I think that in someway, despite of  we were just few people, we were able to do that.